Blog
'Notes on the Black Path' celebrates the industries and communities that have existed alongside the Black Path.
Previous
Next 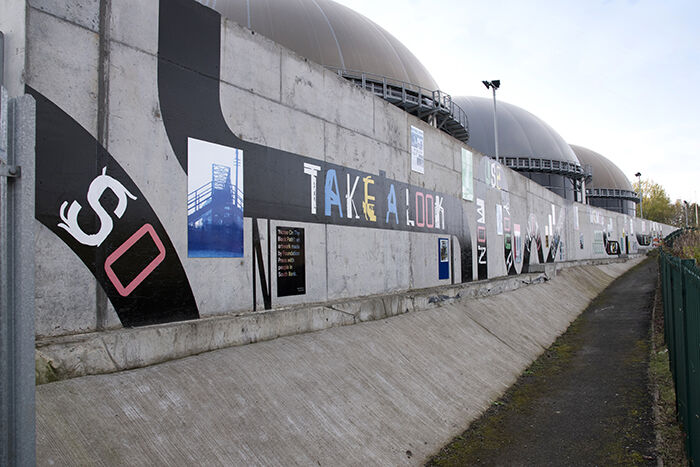 Notes on the Black Path
Foundation Press (see https://foundationpress.org) were selected to take the lead in provision of community workshops that use heritage as the theme for developing individual artworks and developing the plan for the final artwork that will be located on the wall. Their brief includes encouraging local artists to participate.

‘Notes On The Black Path’, is located along the public footpath off Old Station Road, it is a large collage celebrating the historical route known as ‘The Black Path’ and the nearby community of South Bank.
The project began with the creation of a community printing press called ‘Black Path Press’, based at Golden Boy Green Community Centre on Normanby Road. Over the course of 2019, ‘Foundation Press’ worked with groups and individuals to creat a collection of books that explored subjects big and small, past, present and future. The public artwork redesigned content from across the books, workshops and conversations into a display of posters, information panels and visual experiments. All 36 books made by Black Path Press over the course of the project have been distributed to individuals living near to the artwork and are on display in museums and local libraries across Redcar & Cleveland.

The Black Path is an ideal location for celebrating Teesside’s industrial heritage. As early as 1866, over forty blast furnaces lined it and in the years since it has continued to be encircled by a range of industries — iron, steel, slag, engineering, ship-building, chemical, salt, shipbuilding, etc. However, there was a path known as the Sailor’s Trod in advance of industrial development of Teesside. It ran from Newport to ports at Cargo Fleet, Tod Point in Warrenby, and Whitby. As the name suggests it was a route that linked various ports and was primarily used by mariners. It may well have been the route taken by a young James Cook. The “trod” was diverted in 1861, to follow the railway line between Middlesbrough and Redcar. It eventually became known to its users as the Black Path, and continues to be an important thoroughfare: it is the end section of the TeesdaleWay, part of the Coastal Footpath and still an important walking route between local settlements, as well as to and from the Riverside football stadium.
Next
Previous